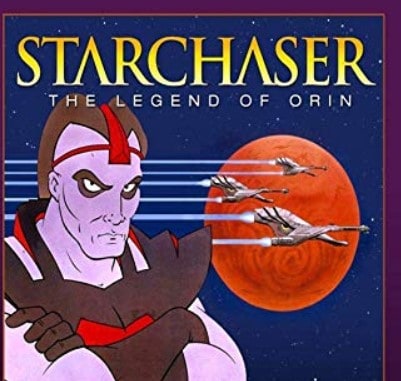 Through browsing various databases of cheesy sci-fi and fantasy films, I ran across one I did not recognize at all.  I consider myself well versed in all things cheesy where movies are concerned, but this one caught me by surprise.  However, after watching it, I was even more surprised.

Everything I have read claims that Starchaser: The Legend of Orin, is simply a cheap ripoff of Star Wars, in animated format.  One interesting note is that Starchaser was one of the first animated movies to mix traditional and computer animation, as well as one of the first to be released in 3-D.  Watching it, I was impressed with its fluidity in animation and how well it was done.  For its time, it was ground breaking.  It has since gained a small cult status.  However, as I said, it has been criticized over the years due to similarities to Star Wars.  Although some aspects had some similarities, there is enough difference that I found the movie somewhat interesting.

The movie begins in a subterranean mine, where human slaves are mining a special crystal.  They are being watched over by robots wielding laser whips.  The mine work is very dangerous, as displayed by constant tunnel collapses.  The red crystal being mined apparently has great value to their “god overlord” Zygon.  We are introduced to our hero, Orin, a young mining slave with long blond hair and a habit of questioning his position in life and an ambition to go to the forbidden surface above.  Of course, this gets him in trouble, and also gets a few friends of his killed.  Almost resolved to accept his lot in life, he stumbles across a bejeweled sword in the tunnels while mining.  Out of it appears the ghostly image of a bearded old man telling Orin that he has a destiny.  Once this happens, the blade of the sword disappears and he carries a bladeless hilt for the rest of the movie.

Okay, admittedly it starts out with some similar elements of Star Wars, but the underlying subplot is really what got my attention.

Eventually, Orin finds new-found abilities to manifest an invisible and sometimes glowing blade from the hilt to attack his enemies.  Using it, he finds his way to the surface after escaping the mining complex and discovering that Zygon is no god but a sentient being no different from him (for most of the movie, you believe he is a gray-skinned human but eventually discover he is something entirely different).  Chased by Zygon’s robots, Orin causes an explosion (the crystals are highly volatile) that causes a collapse.  Zygon assumes Orin died in the collapse.  Orin is able to escape to the surface and finds a dangerous jungle world above and eventually runs into… wait for it… a gruff smuggler and pirate named Dagg Dibrimi, who owns a tramp freighter, the Starchasrer, and is looking to steal a cargo of crystals.

I promise, I will get to the differences soon.

Of course, Dagg steals some crystals from Zygon in a blaze of glory.  Along the way, the new party finds a feminine robot named Silica. They travel to another world where Dagg attempts to not only offload the crystals but also his new-found passengers.  Along with Arthur, the ship’s annoying AI, they adventure onward and outward, trying to find Dagg some money while Orin tries to convince him that they have to follow a destiny.   Somewhere along the way, we learn about some ancient guardians called the Ka-Khan, who wielded Orin’s sword to protect the humanity.  A major foe of the Ka-Khan 1200 years ago was Nexus, who sought to enslave humanity and ruled over 52 systems.

Okay, I swear there are differences.

They also meet along the way Aviana, the daughter of the system governor, and apparently an authority that Zygon should be reporting too. But Zygon is pulling the wool over the local authority’s eyes by enslaving humans in the minds and not using the robots for their intended purpose.

The underlying differences lie behind the Zygon, who we find out is actually Nexus, an immortal android.  He apparently covertly conquered the mine world (Trinia) with what remained of his robot force after the last time the Ka-Khan defeated him.  The underlying plotline is his plan to enslave humanity once again.  Zygon formed this industrial complex to mine this valuable crystal, supposedly with robots.  Instead, he armed the mining robots, enslaved a human population and built a fleet, all hidden from the eyes of the local authority.  His final plans to attack the human worlds are the bulk of the last half of the movie, and of course they do not go his way, thanks to our heroes.

What I found interesting in this is the plot behind Nexus/Zygon.  He enslaved an entire population long enough to entrap them in a subterranean mine and brainwash them in believing that the surface was hell and he was their god.  At the same time, he is building an army of robots out of mining droids, while the worlds of humanity ignore him, probably because he is trading in a very valuable crystal.  There are some plot holes in there that I can’t quite fill in within the context of the movie.  However, in an RPG game, it can easily work.

Although there are some elements similar to the Star Wars plot,  the underlying plotline made the movie somewhat original to me.  Although the Ka-Kahn plot was somewhat connected to that, I think the movie could have done without it and figured out a more interesting way to motivate the characters.  It was a little too Jedi-like, admittedly.

Visually, the movie is stunning for its time.  The CGI was great for 1985.  The art and scenery was also great.  The vision of the universe alone would be inspiring for any RPG GM.

For an RPG GM, I found the following inspirations

Building of Hidden Army:  This was done in the Star Wars prequels but not to my satisfaction.  Zygon/Nexus actually had a stroke of genius building his army in the mines of Trinia.  The way I picture it (and is sort of implied in the movie) is that he picked a world that mines a very rare and valuable crystal.  Perhaps it is needed in drive system or in weapons making.  As long as the powers that be get their supply of this crystal at a low price, why question any activity that Zygon does?  Meanwhile, he uses the profits to build an underground facility, where he builds a massive robot army.  The locals continue to send him supplies to maintain his robot mining force, while he enslaves a local population to do the work the robots were supposed to be doing.

Of course, the plot hole lies in the population.  How does he render a population into the primitive state where they believe him a god and the surface world is hell?  Were they primitive when he arrived?  Assuming humanity only comes from one place – Earth – they would be colonists.  It would take a lot to render colonists down to primitives.  If this is another universe, like Star Wars, then the state of their society could be anything.

From a fantasy perspective, I could easily see a dwarven tyrant mining gold from the mountains for the local kingdoms.  The kingdoms send him magics and supplies to create clockwork golems to mine the gold.  As long as they get their gold, what do they care what else he does?  In reality, he has enslaved his own dwarven people and used other magic to make the golems into war machines.  Eventually, he will come down from the mountain and conquer the kingdoms.

Ancient Threat Arisen:  Yes, this has been overdone as well.  Can you say Sith?  But because it is overdone doesn’t mean it can’t be done in an RPG.  In an RPG, you can’t call it overdone.  You call it tried and true.  Tried and true usually works well in an RPG.  Zygon/Nexus was an ancient android with a focused hatred toward humanity and a strong desire to enslave them.  The reasons why were never explored.  What kind of android was he?  Was he a cyborg like Vader or Terminator?  Or was he like Star Trek’s the Borg?  Or was he like the Replicators from Stargate?  Why did he hate humanity so much?  Was it the obvious “I am Robot. I hate organics,” or something else?  Never answered.  Unanswered questions leave open opportunity for adventure plot ideas.  Also planted in the information about Nexus was the fact that he was defeated multiple times by the Ka-Kahn.  What does that mean?  What did they do to him?  Why didn’t they finish the job?

An Ancient Order: The Ka Khan are obviously the Jedi of this universe.  Or are they Ancients like in Stargate?   Why does this region need guardians anyway?  Where did they come from?  Again, unexplored areas that can be explored in many ways by a RPG GM.

B-movie Inspirations: Nemesis (1992) and its sequels

Ether Wars is the new game being Kickstarted by Ether Dev. Provide a brief description of Ether Wars.