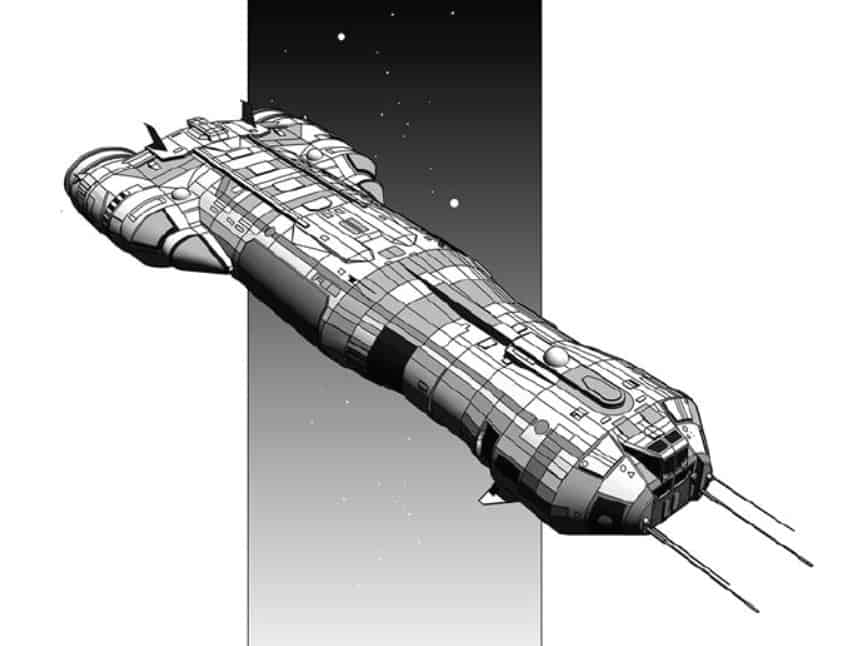 Ships of Clement Sector 5: Traders and Scouts is a RPG Supplement from Gypsy Knights Games.

I never really know how to approach supplements like these.  To me, playing an RPG is all about making the collective story.  Vehicles and equipment are just tools in that story.  However, in sci-fi settings, starships do play a big part of that story and are sometimes the source of that story.

This supplement has a total of seven ships.  Each ship is detailed, starting with Background and Development, followed by Specifications.  This is followed by a detailed description of each deck and important locations on that deck.  Included with each is a very attractive 3D rendering of the ship as well as a deck plan for each deck.  If the ship includes a shuttle of some kind, that is included also.

From page # 5: “ By the 24th century, mankind has been working and living in space for close to three hundred years, having spread across the stars for two hundred of those.”

The renderings and the deck plans are on the level of what you would expect from Gypsy Knights – top notch.  These ships are all very slick looking with a strong hint of practicality and realism.  These ships are not only useful in the Clement Sector setting of Traveller but they would easily fit in any hard sci-fi game.

I really like many of the designs of the ships but one that stands out to me is the Palomino-class Runabout.  It is a sleek looking ship that is perfect for an adventuring crew.  I just really like this design.

The PDF ends with pre-generated characters for a 4-man crew of a ship called the Billings class free trader (one of the seven ships in the book), the Profitable Venture, and a series of short adventure hooks.

From page # 5:  “ Within Clement Sector, that far flung pocket of humanity isolated from Earth when the Conduit connecting Earth Sector collapsed, dozens of independent colonized systems continue to maintain trade links and routes despite political and cultural differences by the necessity to trade, to grow, to survive.”

In conclusion, what I like most about this line of Gypsy Knights products is its broad usefulness, the practicality and realism in them and the originality.  This is a great supplement to have if you want some ships to work with for your adventuring characters.

For more details on Gypsy Knights Games and their new PG Supplement “Ships of Clement Sector 5: Traders and Scouts” check them out at their website http://www.gypsyknightsgames.com/, and at all of your local game stores.

MACE East has been in our minds since we started thinking about branching out.  We first tried to